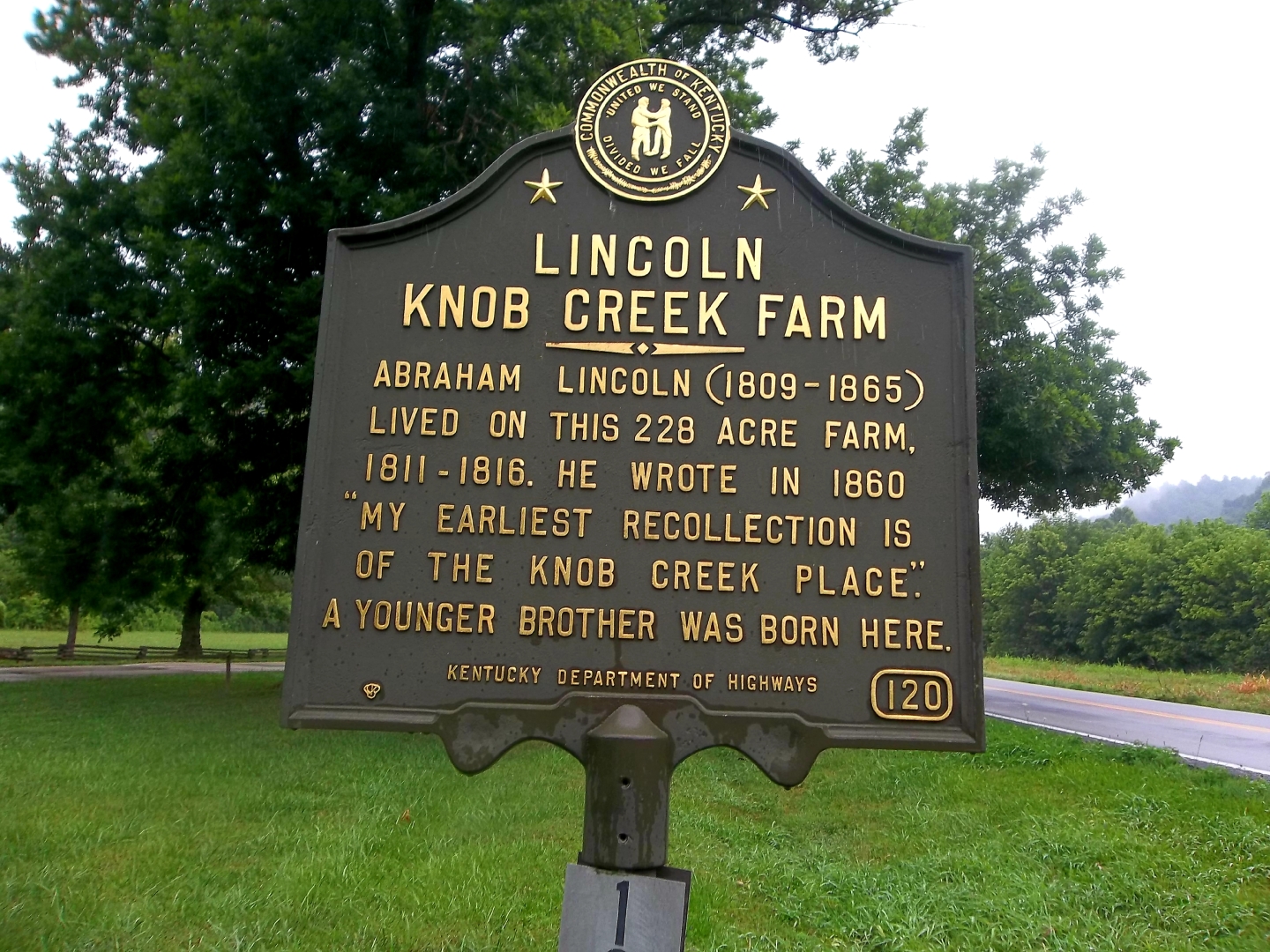 It was on this site in the 1810s that Abraham Lincoln spent some years of his childhood growing up on the banks of Knob Creek. It was written by Lincoln himself in 1860 that “my earliest recollection is of the Knob Creek place”.

Upon 30 acres of land the family of Thomas and Nancy Lincoln lived, farmed and raised their children. Lincoln spoke of his memories such as planting crops with his sister Sarah and the heavy rains that would wash out their crops and fill Knob Creek with water. He mentioned picking berries, running errands and listening to his mother read the Bible on Sunday mornings.

He often mentioned that in his childhood at Knob Creek there was a particular tree that he really enjoyed playing by. His imagination ran wild in the fields surrounded by rolling countryside. His parents sent him and his sister to subscription schools as they could afford it as schools were not free in Kentucky until years later.

The family experienced a great tragedy around the year 1812 when Nancy Lincoln gave birth to a baby boy whom they named Tommy but only lived three days. The cause of his death is unknown and he was buried at Knob Creek Farm.

It was also at Knob Creek Farm that Abraham Lincoln first witnessed African Americans and slavery which would later play a major role in his legacy in American government. Young Abraham watched as slaves were being transported along the Old Cumberland Road nearby.

Austin Gollaher was a good childhood friend of Abraham. One day they were playing in Knob Creek when he fell into the water. Austin reached out a sturdy tree limb and pulled his friend back to shore, most likely saving his life from the turbulent creek water. Lincoln said he was forever grateful to his friend Austin.

The Lincoln’s lived at Knob Creek Farm until December of 1816, when they moved to Spencer County, Indiana. Abraham Lincoln was nearly eight years old as he moved on to the next adventure of his life.

Years later the same Austin that saved Abraham’s life, purchased the land and tore down the old cabin to use the wood to build stables. The stables were later washed away in a flood, abolishing any trace of what would be left of the cabin.

Today the Knob Creek Farm features two cabins at the site. One of the cabins was built in 1800 and is the same one that Austin Gollaher’s family lived in. It was moved to the site of the Lincoln home for historical purposes since Lincoln’s childhood home was dismantled. The other cabin in the Lincoln Tavern that was built in 1933 to serve as a place for tourists see the sites of the past presidents life.

Knob Creek Farm is free to visit and explore the grounds that Abraham Lincoln once lived. For more information please visit, https://www.nps.gov/abli/planyourvisit/boyhood-home.htm.

To visit this childhood home of Abraham Lincoln you meander along Highway 31E, also known as Bardstown Road. See the map below for more details!